Researchers with Project Owlnet study the movements of the species to understand the timing, pace, and intensity of their migration. Licensed banders delicately catch the birds, which are drawn to a net by a call, band them, and release them. Bands with unique identifying numbers are placed on the owl’s legs so that researchers in other areas of the continent can track their movements if and when the owl is re-caught.

From dusk until midnight, you’ll routinely check for Northern Saw-whet Owls alongside Bob*. In addition to assisting in the set up and take down of banding stations, you will also be able to act as Bob’s data scribe, filling out data forms as he bands and measures each owl. Additional field tasks may also present themselves! At the end of each hour, watch as each newly banded owl flies off to continue its migration path. Given the nature of this work, sightings cannot be guaranteed.

*You may stay as long as you want and come and go from the site as you please!

This field research opportunity is offered for all ages, but please note the following path information:

This is a limited opportunity and available dates by are by advance reservation only:

There is no cost for participation. Registration is required: Email Greg Kottler at philanthropy@aviary.org or call (412)-258-9465 today to reserve your date or to ask any other questions! 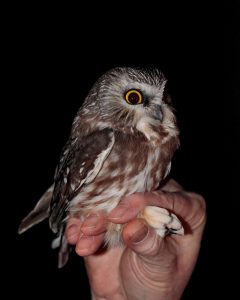 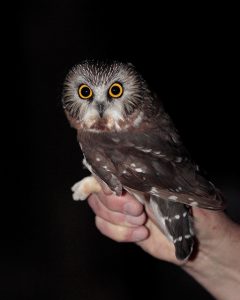 The Northern Saw-whet Owl (Aegolius acadicus) is one of the most common owls found in the forests of southern Canada and the northern United States, but information about this diminutive owl species is sparse. These birds, among the smallest owls in the north, are nocturnal and tend to migrate in irregular patterns, making them difficult to study.

Since the start of Project Owlnet in Pittsburgh, Mulvihill and his team of community scientists have learned a great deal about these secretive birds. Learn more about Project Owlnet’s findings.

Can’t join us for Project Owlnet?

Check out Owl Prowls or symbolically adopt a Northern Saw-whet Owl this fall!