Leading the Way for a Guam Rail Comeback

Guam Rails are small, flightless, and if you blink, you’ll miss them. They dart in and out of the foliage of the Tropical Rainforest at the National Aviary. But great things come in small packages, and in late 2019, Guam Rails made a huge leap forward when their IUCN status changed from “Extinct in the Wild” to “Critically Endangered.” Only one other bird, the California Condor, can claim this conservation achievement. The National Aviary helped lead the way for this remarkable recovery. 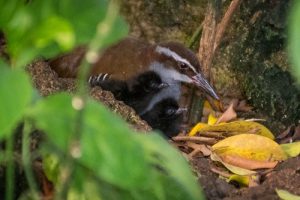 Two small, fuzzy Guam Rail chicks are tended to by one of their parents in the Tropical Rainforest at the National Aviary. The natural setting and spacious habitat encourages natural behaviors and breeding for the rails.

The introduction of the invasive Brown Tree-Snake in the 1950s decimated bird populations on Guam. In 1987, only 21 Guam Rails remained in Guam. These 21 birds were rescued and taken into human care. Since that time, cooperative breeding programs have helped the species rebound. Now, small populations are established on Cocos and Rota, islands near Guam that are free of the invasive Brown Tree-Snake. Of those populations, 39 birds came from the National Aviary.

“In this time when bird populations are declining globally, the Guam Rail’s change in status from Extinct in the Wild to Critically Endangered drives home the necessity of collaborative conservation efforts,” Cheryl Tracy, the National Aviary’s Executive Director, said. “The success of the worldwide effort to bring Guam Rails back to the wild highlights the important work of zoos around the globe in saving species from extinction.”

The National Aviary is part of a consortium focused on rehabilitating the Guam Rail that includes the Guam Department of Agriculture and participating Association of Zoos and Aquariums (AZA) institutions. A Species Survival Plan® ensures the population of Guam Rails in human care remains healthy and genetically diverse.

The National Aviary’s large indoor habitats provide a natural setting that encourages a high rate of reproductive success in Guam Rails and other species, which has enabled the National Aviary to send more Guam Rails to islands near Guam than any other North American zoo. Guam Rail hatchlings and chicks are raised by their parents in the National Aviary’s Tropical Rainforest, which helps them gain necessary skills and develop natural behaviors that position them well for survival in the wild.

Birdwatching and birding have become wildly popular across PA.

Elaine Steffenauer is recognized for her dedication to the National Aviary.

10 Things to Do This Week with Kids | Kidsburgh

Pick up a paintbrush and create a masterpiece during Brushes & Birds!

Ornithologist Bob Mulvihill discusses this annual return of birds from the north to their wintering grounds in the south.